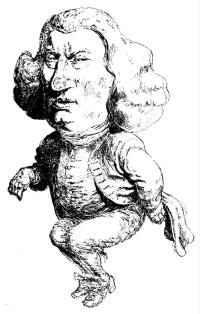 Our logo, reproduced by kind permission of leading Australian cartoonist and print-maker John Spooner, was inspired by the following anecdote, attributed to Carruthers, and printed as a footnote in the 1936 edition of Boswell’s Tour to the Hebrides, the first to be based on the then recently-discovered Boswell Papers at Malahide castle:

“Mr Grant used to relate that on this occasion Johnson was in high spirits. In the course of conversation he mentioned that Mr Banks (afterwards Sir Joseph) had, in his travels, discovered an extraordinary creature called the kangaroo. The appearance, conformation, and habits of this quadruped were of the most singular kind; and in order to render his description more vivid and graphic, Johnson rose from his seat and volunteered an imitation of the animal.

“The company stared; and Mr Grant said nothing could be more ludicrous than the appearance of a tall, heavy grave-looking man, like Dr Johnson, standing up to mimic the shape and motions of a kangaroo.

“He stood erect, put out his hands like feelers, and, gathering up the tails of his huge brown coat so as to resemble the pouch of the animal, made two or three vigorous bounds across the room.”

How the Johnson Society of Australia was born

About this web site