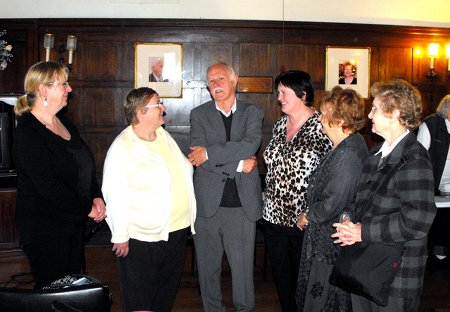 Our sixteenth annual Fleeman Memorial Lecture was given at the 2010 AGM by Past-President, now Vice President, Professor John Wiltshire. John, a founding member of the JSA, is an internationally renowned scholar of 18th century studies, specialising in among other things, Johnson and Jane Austen.

His lecture was entitled Samuel Johnson and Literary Ladies. John set the detail of Johnson’s involvement with female writers of his circle in the context of a time of transition: a time between the end of patronage and the eventual establishing of a readership that could provide a writer with a living.

Johnson, whom we know battled poverty up until the time of his pension, was sympathetic to writers struggling as he did, including women who had to combat the added disadvantage of the prevailing view that they were intellectually inferior.

Consistent with this attitude, John drew attention to Boswell’s scant attention in the Life to Johnson’s involvement with the female writers of his time, such as Fanny Burney, Charlotte Lennox and the writer, patron of the arts, society hostess and founder of The Blue Stocking Society, Elizabeth Montagu.
We were told how Johnson championed novelist, poet and playwright Charlotte Lennox (of The Female Quixote fame), and were given an account of the dinner at the Ivy Lane Club to celebrate the publication of Lennox’s first novel, Harriet Stuart – the dinner that included an apple cake decorated with bay leaves, and at which Lennox was crowned with a laurel wreath by Johnson.

We learned of Johnson’s connection with Elizabeth Carter, the bluestocking’ poet, essayist, and translator of the works of stoic philosopher Epictetus. And of Johnson’s somewhat ambivalent attitude towards Lady Elizabeth Montagu. whose conversation he admired, but of whom he had disagreeable things to say. He may, John suggested, have attended her soirees because of the contribution she made to the promotion of female writers. As we have come to expect. John’s lecture was scholarly interesting, and entertaining. It was followed by a spirited discussion.

THE WESTERN IDLER – Treasures from Melbourne

The JSA at Pembroke College